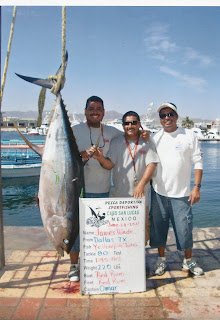 Hey All,
Wow, TGIF! so many things going on this week and many many more in the upcoming one! So many changes as well. Just a few more days ’til Ryan and Brooke can hold their firstborn baby in their arms…future heir of RedRum sportfishing is a few days away from waking up in beautiful Cabo!
On Another note, yesterday’s fishing was SUPERB! Ranger Magers and his buddy James Wade fished twice this week. Their first trip took place on June 22nd with their total catch consisting of 12 yellowfin tunas. 20-25 each NOT BAD for day 1 and for a little sharpy sea. Yesterday June 23rd they also fished same crew Omar and Americo from our 31′ RedRum. Their final number of fish caught on day 2 was only 3 Yellowfin tuna a smaller number compared to a day before.
The only difference was that during yesterday’s fishing, one of the Tuna’s they caught weighed 220 Lbs, was caught by James Wade from Dallas Texas! the other two tunas were an average of 20-25 Lbs, but this huge tuna definitely breaks the record so far for this year.
Congratulations to Randy and James for their outstanding performance.
You can check out a picture of the Tuna at the end of the fish report.
From Houston Texas we also had Jon olson and Chad fisihing on a hald day trip with Alex and Manuel on our 33′ Nuevo. Their catch consisted of 2 Dorados.
Michael and Crystal McFarlen fished on tantrum with Ramon and Jesus and caught a nice striped marlin 8 ft 140 Lbs. They had a blast out there. Congratulations you two!
And Jeffery Dietz also fished on Wednesday on Tantrum with ramon and Juan and he caught a total of 6 yellowfin tuna and 1 Dorado.
Thanks for Reading and enjoy the pics!