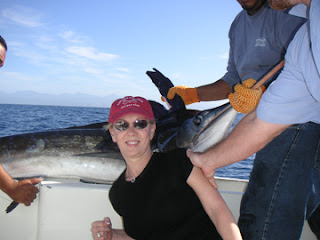 A beautiful day in Cabo San Lucas was accompanied by great fishing for all RedRum anglers. Cesar took Ryan and his mother out for another great day of fishing aboard Tantrum. They fished for a couple of hours and were able to snag 4 Stripe Marlin, all catch and release. Rum Runnin had another great day catching and releasing 4 Stripe Marlin with Monty Ward and his group. Rum Runnin headed to Golden Gate where the bite had picked up again. Reel Rum was lucky they were able to talk to Javier on the radio, they too headed out towards Golden Gate and hooked up with 4 Stripe Marlin as well.

El Nuevo had a late start this morning as Steve Sagan from San Diego came in on a cruise ship to enjoy a day of fishing with RedRum. He and his group had a great day fishing, catching and releasing 5 Stripe Marlin and 3 Dorado. They headed back to the cruise ship and off to their next location.

The office will be closed tomorrow for Christmas Day but the boys will pick up right where we left off.

From the RedRum family to yours, we would like to wish everyone Happy Holidays.