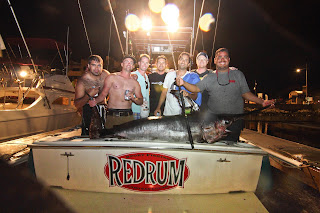 You probably already found out through facebook, twitter and what not, that on Friday we had a group of guys from San Francisco fighting a sword for more than 9 hours?? No? Well here’s the scoop!

On Friday, I received a call from Captain Omar and first Mate Americo telling me that they would arrive a bit late because they were fighting a BIG FISH. I right away thought it was a Marlin, little did I know they were talking about a Sword Fish, who’s weight was 320+ Lbs.

It’s been 3 years 3 months since RedRum fought and landed this kind of fish. The one caught a while back weighed 260 Lbs. After so long and patiently waiting for the next big catch on Friday that wait came to an end. Michael Black, Shawn Meroni, Mark Roberts, Brendan Morris, Conrad Castor and Sameer Advani where at the airport Thursday about to catch their flight to Cabo San Lucas when they called asking for prices on fishing charter. The information was given and they were going to decide which boat they wanted to take, if any.

A few minutes later I was back on the phone with Mike and they had decided to book the 31′ RedRum. Friday Morning came and it was almost 7 AM…no sign of this group, I started dialing the number provided to remind them of the charter, when in Cabo you know it’s normal to party out a night before and I just wasn’t sure if this was the case. As soon as I hung up the phone, they walked into the office ready for their trip.

These awesome, down to earth guys, were ready for their trip. Omar and Americo walked them down to the boat and off they went into the unexpected. By 11 AM, they had a sword fish on the line, which was caught on live bait with a 50 Lb fishing line and 80 Lb test leader, Custom made fishing pools and shimano reel.

By 6:30 PM, every member of the RedRum family was at the dock waiting patiently to know if the fish had been defeated during the fight, we weren’t sure if they were going to land it since it had been over 7 hours of fighting and Mike and team were a bit tired and ready to give up….All of the sudden Omar contacts us and says “It’s gone to a better life” The cheering started, everyone was stoaked and you can just feel the great vibe at the dock, beers on RedRum, said Ryan.

At 8:30, after a couple of beers and talking with the security dock manager (who wanted to kick us out), RedRum’s headlights start coming in, everyone received Mike Black and his team members with claps, high fives and cheers.

John Donovan had been on the phone with us most part of the day waiting for updated news, I bet he wished he had been here with everyone, it was a fun night. They guys told us how many turns it took each to fight the fish, how they were about to give up on it and how happy and excited they were.

A small interview, thousands of pictures and 6 tired guys was the outcome of this amazing fishing experience. Enjoy one of the many pictures taken and let us know what you think!

Thanks for reading
Nick